By Bartłomiej Stachura on 7 października 2018@Lowkingpl 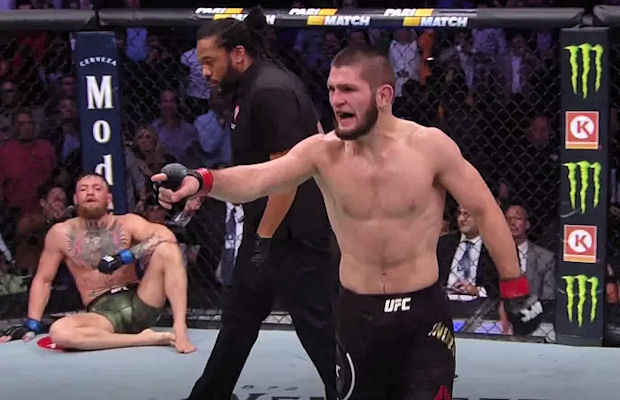 Gotta give that 1st round to @TeamKhabib #ufc229

Seems like it’ll be a looong night for Connor…

Nice round by @TeamKhabib
Played it smart let’s just see if he can keep it going. #ufc229

What a right hand by @TeamKhabib #ufc229

Trying to gas Khabib out?

Mcgregor has committed more fouls than an nba player. 1.) hooking the glove. 2.) pulling the shorts 3.) feet in the cage. 4.) knee to the face on the ground and not even a warning what a joke

Best quote of the night.
Cruz: "I wonder why he isnt trying to get up?
Joe Rogen: "Because he's exhausted!!"
Lol good answer @joerogan #UFC229

Connor getting away with a lot of fouls tonight #ufc229

Who is the champ bitches !!!!!!!! pic.twitter.com/AJZ0fFJFZG

I didn’t see nothing new. I’m not mfing impressed at all. @TeamKhabib I’ll put you on your fucking back. You gone need more than a low single leg

@TeamKhabib I been on yo head. Ali can’t keep saving you. You might as well gone head and retire

The king is slain

This shit is nuts!!

Watching the @TheNotoriousMMA vs @TeamKhabib fight. Unimaginable never thought it would go down like this. Crazier than my fight riot.

Hey guys, two wrongs don’t make it right. Conor didn’t deserve that. No one did. But some things aren’t for fight promotion. Religion, family, country. Throwing stuff in Brooklyn. For Khabib it wasn’t fight promotion, it was really personal. Diff culture man. Sucks

Conor didn’t press charges , that tells me that he understands look I don’t like him he doesn’t like me shit happens. Kinda gangster shit by Conor. He showed lot of heart tonight! Crazy night. Wish we were talking bout the fight.

People get mad at @TeamKhabib but forget what Conor has done a few months ago, it’s all fun and games when it’s for hype and attention but sometimes you play with the wrong people!! If you don’t want none don’t start none

What an interesting win celebration #ufc229

What a great way to represent our sport guys. Great role models for everyone. #UFC229

I don’t condone what happened, but you talk that much trash and attack a nation and get that personal you can’t be surprised. Fun fight, but sucks it ended that way I just hope no one gets hurt in the aftermath.

If Connor was the one to win and do all the extra stuff Dana would have put that belt around his waist and smiled.

Pussy Irish guy attacked a bus with innocent women on it, him and his pussy Dillon daniscorner deserve it all… justice baby!!!

Khabib jumping out of the octagon – not ok. Conor throwing a dollie through a bus – no problem #UFC229

It's funny how when Conor attacked the bus it was "Conor does what he wants!" "Khabib shouldn't have attacked Artem!" And it was funny while Conor was talking bout his family. Now its "OMG the Russians are monsters and should be deported and stripped of visas".. #getreal #UFC229

I can understand Khabib jump the fence In a moment of emotions but his friends and corner man jump and punch Conor from behind it unacceptable.

Conor didn't lose his Visa for the bus incident so why would Khabib? Let's be real here. UFC can get anyone a Visa they want to

This was about as terrible for Mma as a bench clearing brawl in baseball. Dont be so dramatic!

This is fucking nuts

I don’t agree with khabib jumping out of the cage. But people need to remember it was Connor and his team that started this beef. Attacking the bus, all the shit talk. Sooner or later it was gonna catch up🤷🏽‍♂️

I honestly can’t believe the amount of crybabies and pussies on twitter. 🤦🏽‍♂️

One thing I will say and give credit to Connor. He got jumped and cracked pretty clean, and he walked out of there like a fucking man. Honestly looked like he didn’t give a fuck. 👏🏾👏🏾👏🏾 all you Twitter bitches take notes

Wait that almost had to happen . The drama adds to the next build up! #STAYwoke #UFC229

How about we focus on this for a second? Beautiful finish for Khabib 🙏🏽 pic.twitter.com/FAEsxmZ6PK

Do y’all remember Mac and 30 of his friends raided backstage and threw a dolly at Khabib iNJURING several other FIGHTERS and STAFF. Also throwing mud on Khabibs family , team and country for several months and you think it’ll all be cool?…Now they making Mac the victim here?

This is terrible for the sport. No matter what happens before the fight, after, you set it all aside and be fucking professional.

Seriously can’t believe that.. That was insane #ufc229

I don't give a shit what no one says after all Connor has done #FUCKHIM @ Merced, California https://t.co/0ocaMh8oMZ

In my opinion khabib should not have done what he did after the fight but fuck it Connor deserves that and so much more in my opinion if you don't like it don't follow me and fuck off!!!!

Not so cool when shit is real eh?

Rematch will sell double now though!

Conor does whatever the fuck he wants and nobody says shit he’s welcomed back with open arms , khabib hops the cage after all these people said about him and everyone’s like omg what a bad person how could he do that haha

Very true. If you insult a man be ready to face him. Dillon Danis needs to grow up. If Marcelo Garcia (the sweetest man in Jiu-Jitsu) kicks u out of his gym then u are as intolerable as u can get. https://t.co/trmrHOYlEf

Just to be clear I don’t condone what happen to McGregor (being attack after the fight) and I don’t agree with Khabib going after Danis. Still Danis needs to stop acting like a fool and McGregor needs keep family out of it. https://t.co/1hUCoaz9cE